5 Of The Most Popular Sneakers 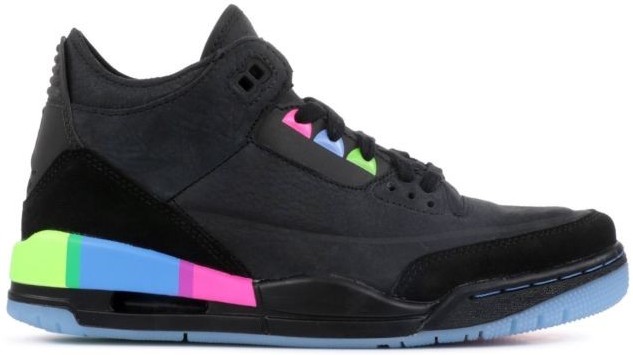 One of the hard to find sneakers is the Air Jordan V Retro Quai 54, which was released in 2011. Maybe at the time you knew someone over seas or best friends with Fabolous (who was seen wearing a pair) at that time. If not you didn’t have a chance to score a pair of these super-limited Jordan 5’s. This sneaker got its name from the Quai 54 Basketball Tournament which was held in France.

Back in (June/2011) it was reported that  the Quai 54 edition of the Air Jordan V would be hitting the House of Hoops this weekend and everyone was quite disappointed from the announcement that the release would not be happening.  After sharing the original information received by a reputable source, different stories began to come out regardig the drop and now have definitively confirmed with the Jordan Brand that there was no stateside release planned.

They had apologized for any confusion and hoped no one started to line up to get a pair.  If now you really want to grab a pair, you may find some on Ebay to pick up a pair.  Since then they have come down in price.  Some of them are used and I think you can still buy a new pair, that has never been worn.

Now with the up coming releases for the Fall of 2018, there are complete guides from Nike, adidas, Reebok, Asics, New Balance and several others brands.  Here you will find confirmed release dates, price, size information and much more. One of the recommended online stores is Footlocker or Finishline.

The in your face styles for men and women’s Nike Air Max Plus for this fall is mesmerizing now as it was when the experimental design debuted in 1998 which changed the game forever.  With their same fierce detail, like the injected ribs that wrap the upper, but with the new technology, todays version is exactly what everyone is looking for.

With their double-lasted stretch synthetic upper which provides the breathability and features bold injected ribs for an edgy look and better fit.  Having the lightweight comfort in the forefoot and heel.  Their tuned Air Technology in the heel of the midsole creates supportive cushoning, while the rubber outsole provides traction and durability.

Puma’s growing thunder series continues to be one of the most surprising new additions to the sneaker industry this year.  As the German Sportswear brand has ceated a formula that has resulted in a number of this years best “dad shoes”.  After the sell out release of the Thunder Spectra adn the Thunder Electric, Puma is ready to add the Thunder Desert to their mix.  All three sneakers boost almost the same silhouettes, but the design and color options are the main differences.

The original spectra utilities a classic mesh and leather combination with a primarily black color scheme surrounded by multiple colors, while the Electric got a bit more daring with its aesthetic makeup.  Both going after the women’s options which utilize the metallic foamstrips, while the men’s pair fall upon the sneaker industry staples the kicks of a gum bottom and speckled soles.

While the Desert is the most subdued of the three as it relies on much more neutral tones.  A classy suede for a more sophisticated look, while the midfoot strip sports an over-tumbled pattern.  These Puma Thunders will come in Mint, Black, White and Beige.

These Air Jordan 13 was inspired by Michael Jordan’s cat-like reflexes on the court, so the sole of this model is designed after a panthers paw and a hologram on the ankle that looks like a cats eye.  Delivering a premium style and was the shoe Michael Jordan wore as he won his 6th championship.  After that season he retired for the 2nd time, adding even more significance to this Retro 13 shoe.  Having an incedible unique design that made it a fan favorite and a must cop for sneakerheads.

This sneaker is modeled after the speed and prowess of a panther, where the style features a quilted leather upper with a round hologram on the side and unique hidden lace system.  With a phylon midsole with heeel and forefoot Zoom Air units for supreme cushioning.  Having rubber outsole for the durability and traction on multible surfaces.

From Footlocker or Sneakersnstuff the Rock James Harden’s signature sneaker is an on court look anywhere at anytime. With the adidas Harden Vol 2 LS Buckle which has a streetwear approach and built for all-day comfort.  The upper construction includes leather and suade having a sock-like design so it has a snug fit.

Adding “0013” engraving to the adjustable buckle which adds an element of style.  The Boost cushioning that has been added to the midsole for comfort and flexibility and having a rubber outsole to provide traction almost anywhere, make these sneakers a sure catch.

Sneakersnstuff also carry this Rock James Harden Signature Sneaker in their stores as well. This adidas sneaker is bring brought out on the heels of James Harden’s because of the first winning MVP award.  They will be unveiling his latest lifestyle sneaker.  It will be shown in three editions: Night Life, Cargo, and Zeus, the latter of which honors Hardens recently passed pet bulldog.

The New Balance 990 gives the perfect blend of comfort and style.  This lightweight shoe is constructed diffeently then any other New Balance shoe before it, because of the new technology, including a heel motion control device.  The design of the original 990 gives runners a shoe that provides stability, cushioning and flexability, all in one shoe.

This 990 is the first athletic shoe to febut at $100 and because of the price, many doubted its potential in the running market.  But orders reached 50,000 and since then the momentum never slowed down.  This New Balance shoe is made in the United States.  New Balance is keeping with the 30 year tradition of the 990 with this updated version.  These are a combination of classic and modern that runners are sure to enjoy.  This 4th edition on the 990 os more breathable than any of the previous models.

Featuring a mesh and pigskin upper for lightweight comfort and added durability.  The ENCAP midsole provides next-level support and cushioning.  The blown rubber outsole ensures you can run on any surface and still have the traction you need.

These sneakers are just coming out, so if you want a pair right away, you just have to put in your size and color you want.  Footlocker, New Balance or Finishline will have them.  As far as the Air Jordan V Retro Quai 54, Ebay may have some.  These are very Kool.